Putting aside mind-blowing cost overruns, along with delays at a Chinese steel fabrication plant, engineers and scientists are following the equally mind-blowing construction feats in the eastern span of the San Francisco–Oakland Bay Bridge. 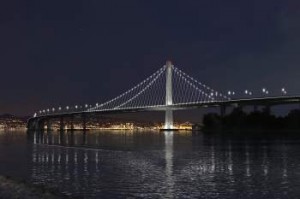 Scheduled (so far) to open in 2013, the $6 billion (so far) to replace the earthquake-vulnerable current span employing groundbreaking engineering to create the world’s first self-anchored suspension bridge. Unlike the current span, part of which collapsed in the 7.0-magnitude 1989 Loma Prieta Earthquake, this one is designed to withstand rare seismic events. Specifically, the span has a “1,500-year return period,” meaning the largest rock motions expected to occur at the bridge site once every 1,500 years.

At the heart of the engineering is the design of the 525-foot tower and its four innovative “shear link beams” which can move and twist independently of each other. These beams attach to a complex foundation whose 13 angled piles extend 196 feet below the waterline and are anchored into bedrock through “rock socketing”—reinforced concrete that is placed within steel shafts which, in turn, are drilled into bedrock.

One of the 13 piles of the foundation contains seismic monitoring equipment to collect information for the California Division of Mines and Geology.

In addition to the tower, two huge marine foundations are to supply support for the tower on Yerba Buena Island and at the eastern end of the road decks.

It is in the use of shear link beams that has caught the attention of engineers. The idea was to use elements of the Timoshenko beam theory, developed by Ukrainian/Russian Stephen Tomoshenko in the early part of the 20th century.

Timoshenko, a specialist in continuum mechanics, devised the formula to replace the Bernoulli-Euler theory of beam design.

Now, a century later, his work is put to use in the new Bay Bridge.

Much of this is to be explained on television April 9, when KQED’s Quest airs on Bay Area TV. The show segment currently is online, however, for those who want a sneak peak.

One thought on “Shear beams, engineering and the science of the new Bay Bridge”