Bullies aren’t just kids in the playground anymore — they are also adults in the workplace, or lurking online.

As anti-bullying advocates try to push through new legislation at the state level, several new studies have found that bullying affects different people in different ways. In the workplace, bullying is more likely to target educated employees, while victims of online abuse are more likely to feel depressed and isolated.

An estimated 53.5 million Americans are reportedly bullied at work, according to the Workplace Bullying Institute.

The non-profit organization released their 2010 Workplace Bullying Survey this month based on interviews of over 6,000 adults in August, along with data comparing the recent survey with one they conducted in 2007. 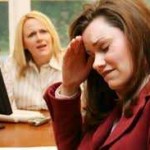 “There are many myths and misconceptions about workplace bullying advanced by disbelievers and opponents,” said the institute’s research director Dr. Gary Namie. “One portrayal is that bullying affects only the uneducated, unskilled workers.”

The participants were asked about experiencing mistreatment, sabotage, verbal abuse, threatening conduct, intimidation or humiliation at work, with 11 percent of workers with a college degree — and 7 percent of those without — responding that they are currently bullied in the workplace.

“Note that the respondents with more formal education reported a higher bullying rate,” added Namie.  “Not having a college degree was associated with a higher denial of bullying rate. Myth busted.”

Bullying, according to the organization, is “mistreatment severe enough to compromise a targeted worker’s health, jeopardize her or his job and career, and strain relationships with friends and family. It is a laser-focused, systematic campaign of interpersonal destruction. It has nothing to do with work itself. It is driven by the bully’s personal agenda and actually prevents work from getting done. It begins with one person singling out the target. Before long, the bully easily and swiftly recruits others to gang up on the target, which increases the sense of isolation.”

Writing on the institute’s website, Namie says that workplace bullies are “narcissistic” and “defensive,” and often target people who are effective, popular and helpful on the job — but who also may not be subservient, or not “sufficiently political.”

Among students, a survey by the National Institutes of Health found that depression is high among 6th to 10th graders who have been bullied through computers or cell phones.

“Notably, cyber victims reported higher depression than cyber bullies or bully-victims, which was not found in any other form of bullying,” the study authors wrote in the Journal of Adolescent Health. 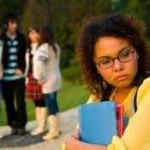 Bullies are teenagers, too.

They also report that “unlike traditional bullying which usually involves a face-to-face confrontation, cyber victims may not see or identify their harasser; as such, cyber victims may be more likely to feel isolated, dehumanized or helpless at the time of the attack.”

Bullying has been in the news lately because of the rise of teen suicides and deaths within the LGBT community.

States such as New York and Massachusetts recently passed anti-bullying legislation to protect children in the public schools.

Namie of the Workplace Bullying Institute is also directing a program to put similar protections in place at the state level for workers, via the Healthy Workplace Bill.

The proposed law was drafted by the Boston-based legal scholar David Yamada — but while it has been introduced in 17 U.S. states, has yet to be passed in any.

In Canada, the province of Saskatchewan banned workplace bullying in October 2007 under the Occupational Health and Safety Act.